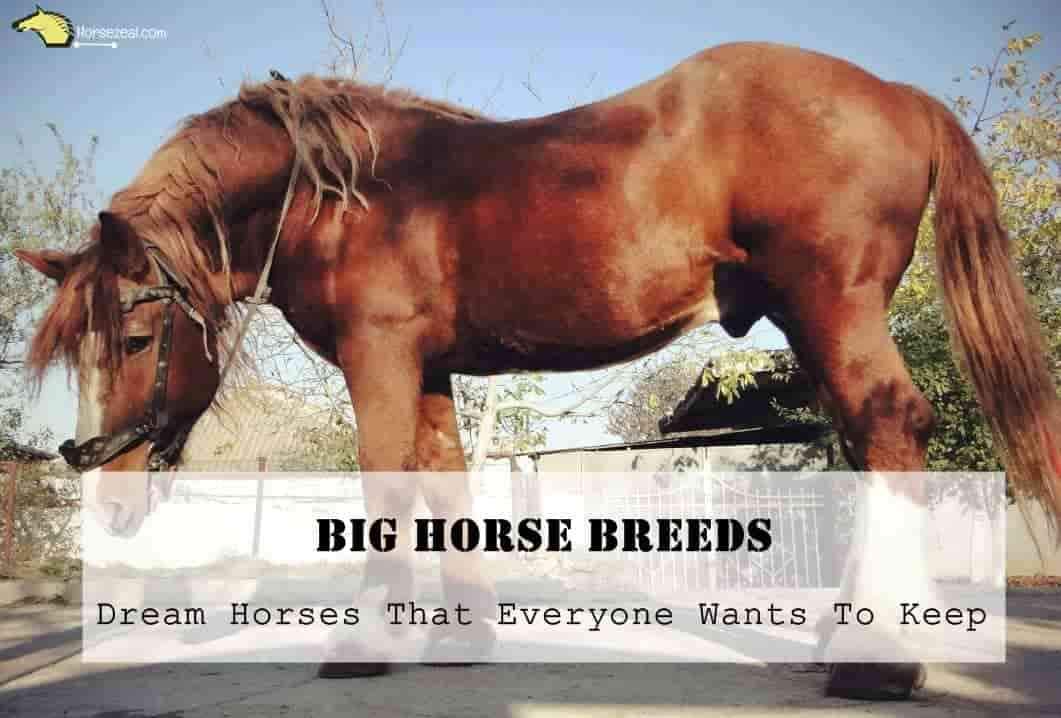 who doesn’t love horses but if they are pretty unique then they grab anyone’s attention very easily. Confirmation so, today we are we have listed top7 big horse breeds. Those breeds are actually much bigger than any other normal horse and they are very much stronger and beautiful as well.

Normal horses usually range in between 5 to 6 feet and weigh 450 kg but those big horses are 10 to 12 feet, can weigh from 1100 kg to 865 kgs. {these breeds are ideal for their tall stature and well built extremely muscular conformation body those are pretty much capable to pull any heavy object.

It’s very different and interesting, even some of the horses are Dream pets for many horse lovers. In fact, many peoples are very curious to know about the largest breed of horse in the world in 2020.

big Horse Breeds in the World

if any horse is very biggest in the that was definitely the Shire. The Shire is basically a British breed of draft horse in black, bay, grey color. by the way, this horse is very strong that’s why it was used in farm work, transportation, as well as cart-horse for road transport those, are existed in England early 1145 but nowadays it’s really disappointing that we have no real records that those animals resemble today’s Shire horse.

The Shire is number one in our list,  its Height around 72inch, Weight: 3,360 pounds, in category draft horse and it could be seen in United Kingdom Country.

Shires have owned world record in largest horse and for the tallest horse also at any time, Shares were proof herself at every point of time. that’s why Shires was the biggest horse in the world

Percheron was also a breed of draft horse from the origin of western France in the 17th century. it has a strong personality with gray or black color. those breeds are very intelligent and mainly bred for use as war horses. Over time, they used for pulling stagecoaches and agriculture and hauling heavy goods as well.

Percheron horse was 72-65 inch in height, and because they are very well muscled Weight is 2,600 lbs. Before World War I, many Percheron horses were shipped to the United States from France, but after the war began, it was completely closed. Here’s the full guide about which are the essential oils for horses.

Suffolk Horse, also known as Suffolk Sorrel or Suffolk Punch horse. is going to be the oldest ever but yes this is still in existence.it was developed in the early 16’s with a very solid appearance and a strong body.it was originally used draught work on farms, also used for pull non-motorized commercial vehicles, gained popularity in the early 20th century

this horse was Height between 68-60 inch, Weight around 2,200 lbs. as earlier we discuss it’s from Country England. Suffolk Punch horse Suffolk dealer imported to Denmark in 1860s and then for selling Suffolk Punches importing in Mecklenburg Stud for Germany.

Clydesdale is also a breed of draft horse, it has a very fascinating name right? that horse was named from county Scotland. its breed was derived near 1826.but notice that is probably smaller breeds of draught horses, but nowadays it would be a tall breed it’s basically used for husbandry and heavy hauling in Glasgow.

Clydesdale horse’s Weight around 2,000 lbs and height near about 72 to 82 inch and this breed belong from Scotland. this was considered thousands of horses in World War 1 after that breed numbers declined in a very small number that was really demotivating for World War 2.in between numbers have increased but yes they are still can’t able to fulfill the requirement.

trainers are very fond of their quiet nature because they are very easy to train them and are able to make a trained horse.

Dutch Draft horse is a Dutch breed of heavy draft horse breed in early twentieth to Zeeland as known as Zeeland Horse and it has and very well built body muscle with great stamina. this is actually cross-breeding and created after the First World War.

Dutch Draft was originally used draught work on farmers as laborers its contribution is immense during the two world war 2.its weight around 1,600 lbs and Height 64 inches and it belongs from the Netherlands. it’s a very well-built horse from any other in our list that’s why it does almost everything you can imagine, Dutch Draft horse name was written in gold word on the history.

Russian Heavy Draft is a proper Russian breed of the draft horse it was bred in Imperial Russia in the nineteenth century. this breed was short a muscular horse with medium height.it’s basically used as labor like pulling heavy goods, commercial vehicles, etc. This horse Weight around 580–700 kg, Height 60 inches it comes from Russia itself.

Russian Heavy Draft kept for high milk supply she can easily deliver 2500 kg milk in six or seven months and this milk mostly used for the production of kumis. Check Friesian horse price if you like big horse breeds.

American Cream Draft horse is only one breed that is only from the United States and it still exists as well as rare. the name of this horse is understood by its color that is cream color her another name was gold champagne. this breed was developed in the early 20th century in America.

this breed Weight 680–730 kg, and height 60–64 inches with a well-muscled body and with strong solid legs. However, basically used medium was hulling old passenger vehicle, farm work, and another industrious work

The horse is the only animal that actually has been owned by farmers as well as the richest man in a different way so from that point we pretty much understand of a priority of a horse who just accompany to everyone it might be in the farmhouse it might be a horse-driven commercial vehicle, to increase the beauty of any and so many places.it’s proof that versatile is a peach of cake near a horse.

Q1.What is the largest breed of horse?

ANS. The biggest horse in the Shire in the whole world even Shires have owned world record in largest horse and for the tallest horse also at any time

Q2.What are the big horses called?

ANS. The Shire called the big horse in the world.

Q3.Which is bigger Clydesdale vs Percheron?

ANS.  Percheron is bigger than Clydesdale

Q5.How much is a Clydesdale horse worth?

Horsezeal.com is a participant in the amazon services LLC Associates Program designed to provide a means for sites to earn advertising fees by advertising and linking to amazon.com additionally, Horsezeal.com participates in various other affiliate programs, and we sometimes get a commission through purchases made through our links.